I was a monumental undertaking… Mr. Scott Gibson, who had been to Namotu and Tavarua previously, assembled a group of friends and family that nearly monopolized the island for a week. Namotu allows a maximum of 20 surfers/guests at a time in order to control crowds. Out of the usual TGT crew, only 3 were in attendance, Wyatt, Nuby and Brough, but a solid group of old friends were there, including 3 Gibsons, 2 Skakels, Hoyle, and Bradford.
We left from LAX, arrived in Fiji and boated over to the island. The festivities began. It’s clearly a surf destination with nothing to do beyond surf, which is fine, as the surf is outstanding. We had great waves by our standards, but fair to theirs. The first days yielded 4-5′ surf while the following days ranged from 3-4′. We surfed Wilkes the first few days, then spent most of our time at Swimming Pools and Namotu Lefts. The left had a strong current and being in shape would have helped.
Some highlights outside of surfing included a fabulous snorkel session with crystal clear water and incredible coral. A trip to Tavarua to hang out and have some beers and check out the spread and ping-pong. The food was fabulous and the service was outstanding. Watch out for the beer tab… EVERYTHING is included, but the bar tab is extra and you settle up at the end of your trip. Nuby was somehow put down for a $200 tab for the Tavarua afternoon alone.
On one special evening in the week, the crew puts on a semi-traditional kava ceremony where all visitors are treated to the opportunity to drink kava, commune and cut loose. Wonga is the island chief and master of ceremonies…
Some pics. The island

Wyatt, Nuby & Brough (Notice how tall Brough is compared to the other little fellas) 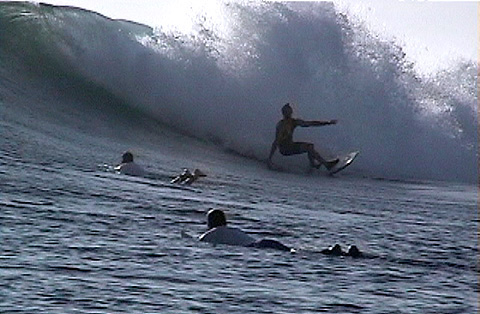